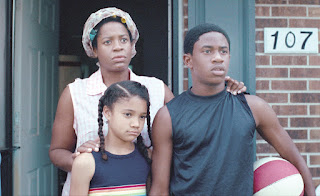 Tina Mabry shot this film on actual 35mm. The graininess of the image is obvious. It's inspired by her actual experiences growing up in Mississippi. It premiered at the 2009 Slamdance Film Festival. Mabry self-distributed the movie in 2010. It aired on the cable network Showtime in February 2011 for Black History Month. It got a limited DVD release that same year and remained so for four years. On September 1, 2015, the movie was made available on Netflix Watch Instant, thanks to a deal by acclaimed filmmaker Ava DuVernay and her distribution company AFFRM and Array Releasing. DuVernay wanted to spotlight overlooked films by female filmmakers of color.

Tessa Thompson stars as Kari Peterson, a young black girl growing up in poverty in Mississippi within a large and very troubled family. Thompson was featured in DuVernay's Oscar-winning film Selma (2014). She gave another amazing performance in her star-making role in Dear White People. She demonstrates that potential here in this tale of impoverished folks trying to claw out the barrel of despair.

Mabry's film has definite echoes of A Raisin in the Sun (1961) and Precious: Based on the Novel 'Push' By Sapphire, except the circumstances seem extremely more desperate. Because the family is big, there is also a wide range of vices or pathologies that all pile on top of one another.

All the characters are starving for money. Some need it for basic survival. Some need it for more. What makes it difficult is how each has some kind of flaw or abuse that hinders them. One character is an alcoholic. Another is a gambler. Some characters are too prideful. Others are too passive. There's also issues of diseases like cancer and diabetes, as well as homophobia and even incest.

Mabry conveys a definite cycle of abuse and a cycle of poverty that is very difficult to escape. It's a swamp or a veritable quagmire. It's also a type of quicksand that entraps the black folks in it. The film just becomes mired in sadness. Every scene ends in heartbreak.

The way the film is cut makes you not wallow in that heartbreak. Mabry's pacing maintains a flow that doesn't allow you to sink in the so-called quicksand. What helps is the performances as well. There are some over-the-top histrionics that have been staples of black films, such as those of Tyler Perry, but handled by Mabry those histrionics don't become like sledgehammers.

The cast includes Michael Hyatt (The West Wing and The Wire) as Delores, Simbi Khali (Martin and 3rd Rock from the Sun) as Anna, and Jossie Thacker (In Living Color) as Charlie. All three sisters are at the center of this story. Much like the film Soul Food (1997), the three adult sisters are the core with their mother and their husbands being integral. Mabry's movie goes further in that she turns the focus on the children and charts the effects being put on them.

Thompson is the stand-out among the younger actors. The others who should be named include Chastity Kershal Hammitte who plays Leigh, the lovelorn lesbian, and Malcolm David Kelley (Lost) and Malcolm Goodwin (The Architect and American Gangster) who play the same character of Sammy at different ages.

Five Stars out of Five.
Not Rated but contains language and sexual situations.
Running Time: 2 hrs.