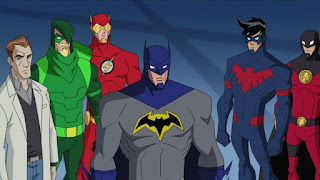 I used to be a fan of Batman: The Animated Series. It seemed to be a dark and intriguing adaptation of the comic books, telling nuanced stories with great characterizations. I liked the Justice League series and subsequent direct-to-DVD movies because it kept up the tradition but leaned more toward amazing action sequences with great perils and stakes.

This movie was inspired by a successful, toy line. Mattel and Fisher Price created toys called Batman Unlimited. It sold well, so Warner Bros. Animation decided to make this movie as a companion piece, so its creation is motivated by profit or purely business reasons, rather than artistic ones. I feel that those reasons perhaps contributed to the fact that this movie turned out as sub par as it does.

Despite being titled what it is, it's more or less yet another Justice League story. It's just absent Superman and Wonder Woman. It's primarily set in a futuristic Gotham. There are flying cars used by police and security guards get robotic suits, not unlike the ones used in Aliens (1986). Batman still patrols the city, but there's no context as to why.

If police and security guards have this advanced technology, what purpose does Batman serve? Is his need to patrol still a need? Obviously, when the super villains start to attack, the need for Batman becomes apparent. The escalation requires the presence of Nightwing, Red Robin, Flash and Green Arrow.

The super villains include Penguin, Cheetah, Killer Croc, Silverback and Man-Bat. With the exception of Penguin and Man-Bat, the origins or motives of the other villains isn't really explored. Like with all the characters, knowledge of them has to be gained outside this story. This story is very bare bones. It seems to be focused on the Penguin but very minimally.

Directed by Butch Lukic, it wants to be more funny than dark, but ultimately lands in a place with little to no tension. Even the story and arc of the Man-Bat character registered no response or empathy either.

What's emblematic of that is a scene where we cut back-and-forth between two fights. One is with Green Arrow battling Killer Croc and Flash battling Silverback. The villains defeat the heroes and instead of killing them, the villains tie up the heroes and walk away, allowing the heroes to escape and come back. It was a stupid moment. Killer Croc's name says it all, but yet Croc doesn't even live up to his name.

No, I didn't expect Green Arrow to die, but it just seemed like the filmmakers should have come up with a better staging as to make the villains seem not so stupid. I was already taken out the movie, but that even further made me dismiss it.

One Star out of Five.
Not Rated but for general audiences.
Running Time: 1 hr. and 17 mins.