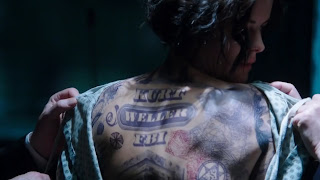 Jaimie Alexander stars as a mysterious woman who emerges from a duffel bag in the middle of Times Square in New York City. She's totally naked, but her entire body is covered in tattoos. She also has amnesia. She doesn't know who she is or how she got there or why this is happening to her.

Most people might recognize Alexander from her appearances in the blockbuster film Thor and its sequel. However, there should be absolute deja vu for anyone who watched the series Kyle XY on ABC Family. Kyle XY was famously about a teenage boy who wakes up naked with no memory as well. Later, a teenage girl experiences the same thing and that girl is played by Alexander.

It's a wonder if writer Martin Gero saw that show and decided to craft this series specifically for her. Instead of dwelling in teenage angst though, this show feels like it will be more plot-driven with occasional dashes of adult, social issues.

Sullivan Stapleton (Strike Back) co-stars as Kurt Weller, a FBI agent who is assigned to the case of figuring out who this mysterious woman nicknamed "Jane Doe" is and what brought her to that duffel bag. He's a Jason Statham-type. He doesn't seem to be a family man. He does have a sister who has a child, but he just seems to be a lone, action figure.

The reason he's assigned is because one of the tattoos on Jane Doe is Kurt's own name. Kurt's name is engraved on her back with the designation of "FBI" just in case there's another Kurt Weller out there who isn't in law enforcement. Kurt leads a team to investigate her and what they realize is that each of her tattoos is a clue to some crime or criminal.

The entire series at first will be Kurt and Jane chasing these clues, as Jane's identity is slowly unraveled. What the first episode demonstrates is that she's an action figure too, slightly more multi-faceted than Kurt. Watching her fight and occasionally reveal abilities like excellent marksmanship and speaking Chinese will be the thrill, but likely her origin will be slightly less ridiculous than her character's provenance in Kyle XY.

What this show brought to light is an issue I hadn't realized and turned out to be incredibly topical. The show points out that until now women haven't been allowed to be Navy SEALs. Hopefully, all that will change, but it's high time that women stopped being underestimated, and this show provides a vehicle for a woman to be the action lead.

Guero and his fellow writers and directors on this series will likely embrace that and let this be an energetic ride. One sequence was reminiscent of Die Hard With a Vengeance, and if the show can continue that kind of energy, it can be a satisfying alternative to the slower crime shows.