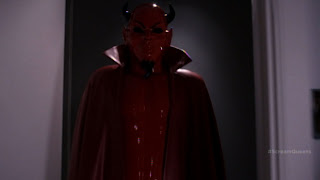 This series seems to combine the best of both worlds. Murphy's teenage world and his adult world are brought together in rip-roaring fashion that is offensive but fun, surprising, and certainly funny.

This summer, MTV did an adaptation of Wes Craven's Scream, the hit 1996 horror film that actually satirized the genre, while also being an excellent example of how great the genre could be. The MTV series posed the question if a weekly series that was essentially a slasher flick each episode could be done, the problem being eventually you would run out of cast members, and the TV series wouldn't be able to last for years like most TV series want to do.

The makers of that MTV program were apparently very short-sighted. Obviously, one would have only to look at The Walking Dead or Game of Thrones. Either a TV show would have to keep introducing new characters or it would have to start off with an enormous cast at the outset. Murphy along with his co-creators and co-writers, Brad Falchuk and Ian Brennan, have done just that. They have numerous characters.

Despite being set in college, they round-robin all the characters in ways similar to high school films like Mean Girls (2004) or the more recent G.B.F. (2014), which establishes the various archetypes and stereotypes, as well as the various cliques that are in play. The majority of the action in the first two episodes take place in a sorority house. There are the insiders of that house, the outsiders and the various adults.

Emma Roberts stars as Chanel Oberlin, the head or leader of the sorority house, known as Kappa Kappa Tau, or KKT. She's the daughter of a very rich man and clearly she's a girl who comes from a lot of white privilege, but there was a humility to her that's all been erased after she pledged to KKT.

Now that she's the leader, she is a supreme bitch. She's narcissistic, superficial, vain, stuck-up and just outright mean, and possibly racist. She's also quite unapologetic about it. She's like a teenage girl version of Donald Trump. She has a lot of power now and will do anything to hold onto it. If you've seen Popular or Glee, Chanel is essentially on amalgamation of Brooke McQueen and Quinn Fabray.

Roberts was in the third season of Murphy's American Horror Story and she was also directed by the recently-deceased Craven in the fourth Scream movie. She appears to be doing a lot of the same as she did in those previous properties but in a higher gear. It's okay because she's so incredibly good at it.

The character of Brooke McQueen in Popular and the character of Quinn Fabray in Glee both had their counterparts in their respective shows. Brooke had Sam McPherson and Quinn had Rachel Berry. Here, Chanel's counterpart is Grace Gardner, played by Skyler Samuels (The Gates and The Nine Lives of Chloe King). Simply put, she is the opposite to Chanel. Grace exemplifies her name. She has a different vision of and for the sorority. Grace believes KKT should embrace true sisterhood and not merely the idea of being minions for Chanel.

Yes, Murphy infuses a lot of violence and gore here as he did in Nip/Tuck and as he does in American Horror Story, but the DNA of this show does lean more toward Popular and Glee. As such, in both those high-school series, the teenagers always had an adult character, or two, with a special relationship not only to the teen characters but to the show overall. For this series, that adult is portrayed by Jamie Lee Curtis.

The term "scream queen" was coined to describe actresses like Curtis who made a name for herself when she was younger by starring in horror films like John Carpenter's Halloween (1978) where she had to do a lot of screaming as her characters typically had to run and hide from some serial killer or monster. For Curtis, it's particularly appropriate as she's also the daughter of Janet Leigh, an actress whose scream was made iconic in Alfred Hitchcock's Psycho (1960).

As Curtis became an adult, she moved more into the realm of comedic films. Not being a fan of horror films, my first image of her was in the hit comedy Trading Places (1983). Curtis' best performances came in comedies like the Oscar-winning A Fish Called Wanda (1988) and the James Cameron blockbuster True Lies (1994), and it's her comedic chops in these movies that she utilizes the most here.

Curtis plays Cathy Munsch, the Dean of Students at the college whose job oversees the activities of the sorority. She's the cynical voice, the literal narrator, who comments on youth culture and the selfish, egotistical and post-feminist nature of it all, and how she's bitter about it and her life, which is a bit of a lonely one.

Cathy has to do damage control once a serial killer starts eliminating people on campus. Given all of this, the show is a very hilarious romp. Each elimination or death is done in a completely absurd fashion like texting-while-stabbing and in over-the-top ways like lawnmower decapitations, and, yes, it is funny. Murphy who also directs the first episode and his writers and fellow directors nail the tone, and makes it a balanced farce.

It starts with the serial killer's look. It's a mix of the black-leather villain in the first season of American Horror Story and the cartoonish costume of a school's mascot like the Blue Devils of Duke University. Here, this serial killer is instead a Red Devil.

Murphy casts a few comedic actresses to help punch up the comedy too. Nasim Pedrad (Saturday Night Live) plays Gigi Caldwell, the lawyer for KKT and Niecy Nash (Reno 911!) plays Denise Hemphill, the security guard. Each is hilarious in their own rights. The rest of the young cast aren't comedians but Murphy and his writers provide them with great lines of dialogue that are just as sharp and LOL funny as he's been for the past decade.

Some standouts include Abigail Breslin (Little Miss Sunshine) as Chanel #5, Keke Palmer (Akeelah and the Bee) as Zayday and Lea Michelle (Glee) as Hester. Given Murphy is openly gay, he easily makes all the boys silly eye-candy. Glen Powell (Expendables 3) plays Chad Radwell, an egotistical preppie. Pop singer Nick Jonas (Kingdom) plays Boone, the secretly gay golfer and Diego Boneta (90210) plays Pete Martinez, a barista and school newspaper editor, as well as the obvious red herring. All three, Powell, Jonas and Boneta, are shirtless or in their underwear for extended periods of time, while the girls and women remain tastefully covered.

The show is irreverent otherwise. The plot moves at a quick and lively pace. It never takes the obvious route. It has great twists and turns. It's shocking in a very refreshing way that most network programs aren't. It also has a dark sense of humor not seen since such shows as Buffy the Vampire Slayer.