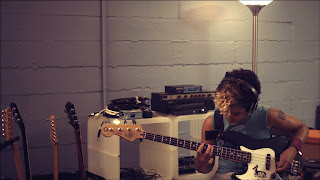 GRU is the short-hand for Guarulhous International Airport in São Paulo, Brazil. PDX is the short-hand for Portland International Airport in Portland, Oregon. This documentary by Daniel Barosa doesn't take us inside those terminals or is even about air travel. It's about a two-man, music group named Quarto Negro who travels back-and-forth to those terminals for half-a-year as the two men work to finish their second album. Except, this movie really isn't about Quarto Negro. The band is more or less a MacGuffin to carry us into and through a tour of the current, Portland, music scene.

The opening, 5-minute sequence is a template for what the film truly is. Barosa interviews 20, probably about two dozen, music artists or bands based in Portland. He edits most of them into his first, five minutes, as each talks for a few seconds setting the scene for what Portland means to musicians. Barosa edits sequence after sequence like this of all these artists commenting on the city, its history, its economy, its people in general and its spirit, giving us a non-specific or vague vibe of how it is there.

Aside from a few anecdotes, what we don't get are detailed explorations of these people. This is mainly because there are so many of them, so there isn't enough time. These dozens of interviews function as a chorus, which is fine, but all of the information these interviews provide is stuff I could have found on Wikipedia.

At one point, a band named Wild Ones has one of its members scream out, "Don't move here!" That line could have been said with literal sincerity from a band that is fed up with Portland's reputation of being a Mecca for indie rock bands and musicians in general. The band member could have also said it ironically, referring to several things.

In 2010, a web series by Aaron Rose premiered on YouTube. It was called Don't Move Here: Inside Portland's Music Scene. The title comes from a 1971 quote from Oregon's 30th Governor, Tom McCall, during a CBS News interview. The series was seven episodes, between 5-10 minutes, and it consisted of interviews commenting on aforementioned topics culminating in a musical performance from a local band.

This is essentially how Barosa's documentary is structured. It's essentially a series of the Don't Move Here episodes strung together. There are interviews and such, and every 10 minutes or so, Barosa inserts a musical performance from a local band. The band or artist performs a full song. After a while, it's like turning on VH-1: Portland edition. Each artist and each song are great, and Barosa, whether his idea or not, cleverly stages the musical performances in various scenic locales throughout the city.

Radiation City performs "Foreign Bodies" under a bridge. Sun Angle performs "Creeping Sun" in an abandoned prison. Natasha Kmeto performs "Idiot Proof" at the entrance to a train track-tunnel. Quasi performs "Fat Fanny Land" in a video arcade in a basement, and The Dandy Warhols performs "Horse Pills" in a strip club. If you live in Portland, this last paragraph probably makes sense, but Barosa's movie gives no context, so who these bands are and why these specific locations are never explained.

While all this is very entertaining, the Brazilian band at the center of this movie gets lost. Quarto Negro truly becomes an after-thought, one we cease to care about. Even when the band's founder, Eduardo Praça, a cute man with short, dark hair, worries how much debt they've raised, we still cease to care. The other band member, Thiago Klein, a tall, hirsute ginger, complains about being tired all the time but again we cease to care.

Unlike Amy, the documentary about Amy Winehouse, there's little here about the creative side or influences of Quarto Negro, or even little about their process or any kind of analysis of their songs or album. You'd think that one of the five musical performances that Barosa features would be Quarto Negro itself. Yet, we never see or hear Quarto Negro perform. The only interesting part of them is the fact that they're collaborating or mixing their album in the make-shift, recording studio of the group The Helio Sequence.

Benjamin Weikel and Brandon Summers of The Helio Sequence are interviewed, and we probably get just as much about them as we do Quarto Negro. I would have preferred more. Instead, we get diversions like with Justin Harris of the band called Menomena. He gives a tour of the renovated church that is now his home and recording studio, but why couldn't that time have been spent learning more about Praça and Klein?

It isn't that the tour of Harris' place isn't interesting, but more about Quarto Negro and more of a dive into their lives to make us care about them are lacking. This movie seems geared for a tourist who has no desire for deep investment or perhaps for a Portland resident who is already well-familiar with the culture and the community and would simply like a passing entertainment.

Three Stars out of Five.
Not Rated but for mature audiences.
Running Time: 1 hr. and 32 mins.
Reviewed for Portland Film Festival.
For more information, go to http://portlandfilmfestival.com/