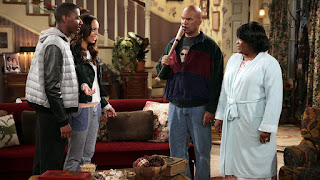 Jerrod Carmichael's series is reminiscent of Martin, starring Martin Lawrence and Tisha Campbell. The relationship between Carmichael and Amber Stevens West who plays his girlfriend Maxine is very reminiscent of the one depicted in that early 90's sitcom. With the addition of David Alan Grier and Loretta Devine who play Carmichael's fictitious parents, the program is also reminiscent of All in the Family with Grier as a clear, modern version of Archie Bunker, and Devine a stand-in for Edith.

Despite the abrasiveness, offensive and insulting nature of Martin and Archie Bunker, both the actors still managed to be endearing or attractive in certain ways. Carmichael can't. Maybe it's just that he's not as good an actor as Lawrence or Carroll O'Connor, or maybe it's just that Carmichael has as about as much charisma as John Mulaney and his now cancelled, self-titled sitcom.

I don't see any chemistry between Carmichael and West, which seems a bit essential. There's more chemistry between Carmichael and Grier, which provides the show's only source of entertainment to see those two battle it out. It makes me wish that the premise of the show were changed to make every scene feature those two, but Devine is excellent as always. West is fine, but her character is needlessly battered verbally.

Much has been made of the series tackling different hot-button issues. While it's appreciated to see a black voice doing so on network television, Carmichael might want to take a lesson from Survivor's Remose. His episode "Gender" felt like an after-school special where everyone was just rattling off bullet-points rather than telling a story with fully-fleshed out characters.

Kylen Davis (Get On Up and Fantastic Four) guest starred in that episode "Gender." Again, his role as a prepubescent teen named Jordan Chamberlain felt like a carefully constructed archetype. He never feels as real as Donis Leonard Jr.'s character in House of Lies, or Jacob Lattimore's character in Survivor's Remorse. Again, it could just be that Leonard and Lattimore are better actors than Davis.