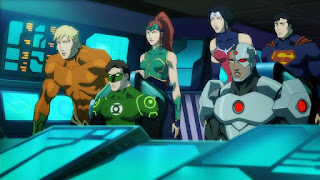 Given there are so many characters, you'd think that the filmmakers would give more time to balance them properly. Yet, this movie is barely feature-length, so it's too short to give any of the titular characters due justice.

There are certain scenes, which made me curious as to their presence. Those scenes hint at lives of the super heroes beyond fighting world-destroying villains, but hints aren't enough. If you're going to open the door, then you should just go through it. Don't then just close it again.

Specifically, I'm talking about a scene where we see Superman and Wonder Woman kiss. There's then a subsequent, romantic scene where we see the two as Clark Kent and Diana Prince on a date, but, their relationship in terms why they're together or what their plans are is never explored. Nothing more is ever made of it, and it would have been better if it weren't included at all because ultimately it goes nowhere.

Cyborg, voiced by Shemar Moore (Criminal Minds and The Young and the Restless), has elements about his story, which go nowhere too, but at least Cyborg is a more central character here, so I'll forgive it. Cyborg is given more to do and he's more vital to the adventure, so it's more difficult to be as dismissive of his character as it is Superman and Wonder Woman.

Aquaman aka Arthur Curry is the son of the Queen of Atlantis, a mythical city buried deep under water, deep in the Marianas Trench to be exact. It's populated with mermaids and mermen. Arthur is also the son of a human, a guy who was a lighthouse keeper from Maine.

Directed by Ethan Spaulding and written by Heath Corson, this movie makes the crucial mistake of giving the villain the ability to do what he sets out to do and succeed. Yet, instead of the villain doing it and succeeding, he stops or doesn't, allowing the heroes time to get to the villain and defeat him. Specifically, I'm talking about a tidal wave that Orr creates, which could kill all humans near the water. He could use it at any time but he doesn't. He waits so that the Justice League whom he defeated can escape and catch up to him. It's stupid. It's absolutely stupid.

However, there is some good stuff, regarding Arthur's story and his family troubles, as well as the issues of the city of Atlantis. When the movie is under water, it's fairly decent. It's only above the water that it starts to sink. The action isn't even all that great. It's the drama that's more intriguing.