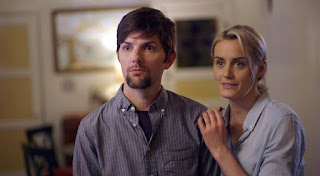 There is a major joke half-way through or two-third through this movie that kills whatever momentum this film had. The ending is a weird cop-out as well. The movie in the beginning is reminiscent of Noah Baumbach's While We're Young, which made it interesting. Writer-director Patrick Brice has come up with a premise that has potential. He even casts four actors who could have made it work, but, like Brice's previous movie Creep, he undermines the premise and tosses that potential away.

Adam Scott (Parks and Recreation) stars as Alex, a husband and father to a little boy. He just moved to Los Angeles from Seattle with his wife Emily, played by Taylor Schilling (Orange is the New Black). One day at a park, they meet a couple who have been transplants for a while.

Jason Schwartzman (Rushmore and The Darjeeling Limited) co-stars as Kurt. He's an aspiring painter who also does work with water filtration. He's a husband and father to a cute, little boy. His wife is a French masseuse and actress named Charlotte, played by Judith Godreche. They invite Alex and Emily over to their house in the hills to allow their children to play and have a sleepover, but it becomes more of a sleepover for the adults.

After a night of fun and frivolity, as well as a few provocative moments, Kurt and Charlotte decide to go skinny-dipping. Kurt takes off all his clothes and reveals he has a very large penis. This causes Alex and Emily to hesitate going completely nude, particularly Alex because, as he confesses in a hot-tub, he has conversely a very small penis. The rest of the movie then becomes about dealing with the various implications of that confession.

As the opening scene suggests, Alex and Emily have problems in the bedroom due to his small penis. It's not until the hot-tub scene that it's laid out that Alex can't physically pleasure her. They were able to have a child, but he's highly embarrassed.

After the hot-tub scene, Kurt helps Alex overcome his insecurities and both of them go fully nude and show-off their penises. As with many movies, the penises shown aren't real. They're prosthetic, and both look incredibly fake. It ruins the joke in two ways.

The first way the joke is ruined is that it isn't funny to see two guys with fake penises proclaiming pride over something that's so blaring in its opposition to reality. I give Brice credit for wanting to put penises on screen, but it just doesn't work. Not showing the penises would have been better because the sight of them kills the emotion.

The second way the joke is ruined is that while the prosthetic for Scott is a small penis, it's oddly not small enough. The average size of a human penis is five inches, fully erect. Anything smaller like one to two inches is considered a micro-penis, which is what one assumes Alex has. If you Google micro-penis, it can look like from a distance that the man has nothing between his legs at all. The shot of Alex fully nude, which is from a distance, looks like he's average and he's not fully erect. Therefore, the joke is completely undermined because you don't believe there is a problem.

Spoiler alert for this movie's ending!

The very last scene has all of that brushed aside and it's never reconciled. It's supposed to be one crazy night and that's it, but there seemed to be genuine issues of sexuality raised that in reality can't just be brushed aside, both physically and mentally. Given that this film is so short, an extra ten minutes or so could have been devoted to reconciling or further exploring those issues, but Brice and his team just cop out.