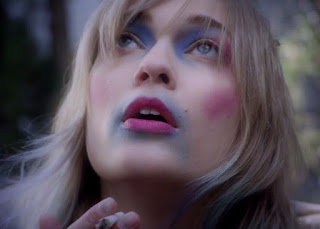 At first glance, it seems as if this film is taking place in the present, this recent year or so, but, specific pieces of technology showcased indicate that the time period is the 1990's, or just before the dawn of the 21st century. The phones used is one indication. The VHS cassette player used is another. However, the movie is set in Portland, Oregon, so the likelihood is high that it is the present and the characters are simply being kitsch or hipster.

Britt Harris stars as Rachel, a high school senior who like many young people in Portland is an aspiring musician. She plays guitar and has instruments and other music equipment in the basement of her family's house.

Molly Elizabeth Parker co-stars as Mona, the older sister of Rachel. She works as an exotic dancer and does characters on stage that are provocative. She's essentially taking care of her sister given that they've recently become orphans. They had a younger brother who drowned, probably due to negligence on Mona's past.

Director and co-writer Steven Richter begins the movie utilizing a lot of close-ups to tell his story. There isn't much dialogue in that Richter lets close-ups relay most of the information here. This is effective for about half the movie, but it reaches a breaking point where dialogue becomes necessary and Richter's resistance to dialogue becomes a detriment.

Kurt Conroyd also co-stars as Zach, a thick-bearded, graduate student studying psychology but doesn't seem to take it seriously. He meets Mona at the strip club or topless bar where she works. With little effort, he's able to go home and have sex with her. He then launches into a relationship with her, which then has an effect on her relationship with her sister.

The key reason is because only two seconds after waking up from sex with Mona, he then becomes obviously interested in having sex with Rachel. Immediately, Zach comes across as unlikeable and disgusting. At one point, Mona and Zach call themselves adults. They also call Rachel an adult, but she claims to be a high school senior, which means she's most likely 18 or younger. That would make Zach having sex with her possibly a crime.

This doesn't seem to be anything Richter wants to acknowledge. One could presume she was left back a grade and can be a high school student of consenting age, but because Richter doesn't do a lot of dialogue, this aspect is never explored. The assumption is that Rachel has a thing for older guys in general, but there is no exploration as to why or what specifically is it about Zach or any other guy that is attractive to her. Is it unresolved daddy issues because that would be cliche?

It's then unclear what exactly is going through Zach's head. He claims to want to help them, but his actions prove otherwise, or prove him manipulative or using them for completely libertine purposes. His actions also prove him violent and the antithesis of anyone you'd want as a psychologist.

His character is uneven and nonsensical in that regard, but that's not as unforgivable as the unevenness of the two female characters. Rachel seems smart in instances and then dumb or nothing more than a plot device at other times. Never at any point do I get what she wants or what her motivation is. Her sister Mona seems stuck in the past or desperate to stay where she is, but Rachel comes across as all over the map, and mainly this is due to the vagueness of her past and her relationship with the other older guy as well as her relationship with what could be called a cult.

The images of birds and the references to them, along with the reference to Neptune, all feel completely random. There might be a metaphor to be gleaned, but it all literally went over my head.