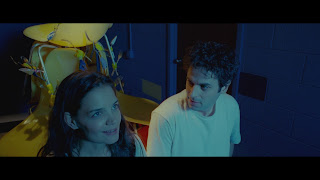 Dr. Kay Jamison wrote a book called Touched With Fire about manic-depressive illness. This movie could be considered an adaptation of that book, but not really. This film has the same relationship to Jamison's book as movies like Think Like a Man or He's Just Not That Into You have to the books that inspired them. Writer-director Paul Dalio crafts a narrative for a book that doesn't have a narrative, giving a fictional story to what is essentially an advice, informational or self-help book. Like those aforementioned book-turned-movies, this one possesses a cameo of its author Kay Jamison. The difference is that this isn't a romantic comedy. This film is a more effecting drama.

Katie Holmes (Batman Begins and Dawson's Creek) stars as Carla Lucia, a published poet who has been diagnosed as manic-depressive. As a result, she's an insomniac and often will have feverish, late-night, writing sessions. She becomes obsessed with determining who she really is by digging into her past, before her diagnosis, much to her mother's concern.

Luke Kirby (Tell Me You Love Me and Rectify) co-stars as Marco, an underground rapper who has also been diagnosed as manic-depressive or what's known as bipolar disorder. His father looks after him but becomes nervous when he realizes that Marco has gone off his medications. The reason is two-fold. Marco doesn't believe he has an illness and even if he did, he believes that illness fuels his artistry as it probably has other artists who may have been bipolar.

Both Carla and Marco are committed to the same psychiatric hospital. The movie depicts a year in their lives. At first, the two are hostile and antagonistic toward each other, but a romance develops. Between the two, Carla doesn't seem as taken by her illness, meaning she seems more functional and stable, not dangerous. Carla's mom, Sara, played by Christine Lahti, reacts in ways that is indicative that maybe she's seen Carla be dangerous, but we don't see Carla that way.

Marco's father, George, played by Griffin Dunne, has a similar look on his face to Sara. His might actually be worse. Yet, we do see Marco acting out in ways that are potentially dangerous, or at least detrimental to himself. When he meets Carla and gets into a relationship, things become even more detrimental.

It feels as if the two might experience a folie à deux and briefly they do. Doctors identify that the two exacerbate their illnesses when they are together. They spiral down a rabbit hole holding each others hands. Dalio, however, doesn't keep track of this spiral and whether it's due to them being off their medications, or if somehow love is a fuel for their illnesses, or a gasoline thrown on fire.

Like with a lot of normal relationships, mainly teenage relationships, when parents tell or try to break-up the couple, this only makes the couple want to be together even stronger. The same occurs here, except the couple is comprised of two, thirty-something adults. It gets a little extreme because the parents have the power and threaten to institutionalize them, or literally imprison them.

Dalio presents an interesting dilemma. Can two people who are both mentally ill sustain a relationship? In that, it's a powerful exploration, an emotional tug-of-war that is very well-acted by Holmes and Kirby.

The only misstep that Dalio makes is his dedication to artists with bipolar disorder, which he does during the end credits. Some are artists that were diagnosed posthumously, so are speculative at best. Even if they weren't, a crux of the tug-of-war is Carla's disbelief or doubtfulness that bipolar disorder is good for art or anything.

By putting that dedication on the film, Dalio shows his hand and whose side he prefers, which wouldn't be so bad, if that side wasn't the shakier and more ephemeral side. The idea of bipolar disorder unchecked fueling artistry is the shakier side to the more solid side of Carla who thinks bipolar disorder unchecked can be physically dangerous as she witnesses first-hand. Dalio in a sense pulls the rug out from under Carla. It's a little unfair.

Four Stars out of Five.
Not Rated but contains language and sexual situations.
Running Time: 1 hr. and 46 mins.
Reviewed for Portland Film Festival.
For more information, go to http://portlandfilmfestival.com/