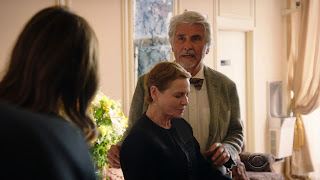 Following The Big Bang Theory, this show has the odd standing of not being a multi-camera sitcom. It lacks a laugh track, so every punchline isn't punched up with annoying uproar.

Given the fact that a chunk of the first episode takes place at a funeral, I did have visions of the Fisher family in Six Feet Under. Even though that HBO series was a drama, the Fisher family was a whole lot funnier than the family here.

We first meet Matt Short, played by Thomas Sadoski (The Newsroom and The Slap). He's on a date, presumably a first date with Colleen. They go back to her house presumably to have sex, but Matt is surprised to learn that she still lives with her ex-fiance, Chad, played by Jordan Peele who's basically doing his typical shtick, a non-threatening but pretending-to-be-threatening, black man.

Writer Justin Adler could have made a funny moment out of the fact that due to economics and financial struggles, two formerly engaged people who are still roommates are trying to navigate life afterwards. Yet, Adler has to make it the most ridiculous thing ever with Peele mostly acting as a weird buffoon.

As we also learn, Matt and Colleen can't have sex at Matt's place because it seems that Matt lives at home with his parents. Adler could have made something compelling about the fact that a lot of adult-children do move back in with their parents, and perhaps he will in future episodes, but here the default seems to be just have people other than Matt be weird, naive or clueless to the fact that Matt just wants to have sex in peace and privacy.

In what's supposed to be the second story and a separate one, we meet Greg Short, played by Colin Hanks (Roswell and Fargo). He's in the delivery room with his wife as she's giving birth to their baby. What follows is a commentary on how delivery can wreak havoc on a woman's body, particularly her vagina.

Adler provides some interesting and often, unspoken information here with some comedic content to boot, but director Jason Winer's pacing and briskness doesn't aide that comedic content. The tagline of this show is "One big family. Four short stories." Obviously, it's a play on the family's last name but also a statement that it will attempt to tell four stories every week, and if this episode is any indication that might be too much.

So far, each story feels rushed. Winer pushes things along too quickly that we rarely have time to feel anything or absorb any of the emotions. Most TV shows, particularly half-hour sitcoms tell at most three stories, an A-story and B-story, as well as occasionally a C-story, but that's it. Any more than that and you're not telling stories. You're doing sketches, toilet humor sketches at that, which don't amount to much.

Thirdly, we're introduced to Heather Short, played by Betsy Brandt (Breaking Bad and Masters of Sex). She's in the front passenger seat as her husband drives her and their three children up to a college, so that their eldest son can tour the school for the weekend. Like with the previous two sketches, this is all about sex, sex that their virginal ginger of a son isn't having as well as the sex that she and her frustrated spouse also aren't having.

This third segment does lead to what is the funniest and most interesting moment of this first episode. Back in their hotel room, the parents have to deal with their middle child telling their third child that Santa Claus isn't real. Their third child who is also their youngest daughter then asks if the Easter Bunny or the Tooth Fairy is real, and the parents tell her the truth. The youngest daughter then asks if God is real, and it's a great moment, funny because it was smart and didn't do the obvious, which is play on toilet or sex humor.

The fourth and final sketch introduces John and Joan Short, played respectively by James Brolin (Marcus Welby, M.D. and The Reagans) and two-time, Oscar winner Dianne Wiest. John decides to celebrate his 70th birthday by throwing himself a funeral. It's ridiculous and the only good part about it is Joan calling it out for being ridiculous.

The sketch does lay the groundwork for future issues the individual, family members will face. It essentially makes the final segment a glorified teaser, which the episode overall didn't need. Even as bad as the Americanized version was, I would have preferred a structure like The Slap, which focused on one individual per episode, not this mash-up.